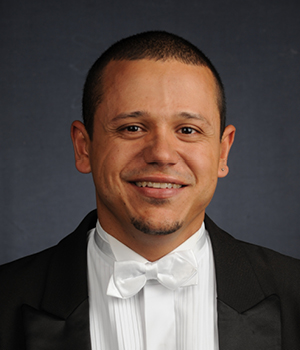 Gustavo began his studies in 1991. From 1998 to 2001, he studied at Minas Gerais State University, obtaining his BA in Horn. He has taken part in classes and festivals with Adalto Soares, Edward Brown, Eric Ruske, Luiz Garcia, Mario Rocha and Sergio Gomes.

He has been a member of National Symphony Orchestra, at Rio de Janeiro, and, as guest musician, of Petrobras Symphony Orchestra. In 2001, he won the Young Soloists contest of Minas Gerais Federal University (UFMG) in the category Symphonic Band, and a year later, Gustavo was the winner of the 1st Eleazar de Carvalho National Contest for Young Instrumentalists and Conductors, in the section Minas Gerais Symphony – Brass category.