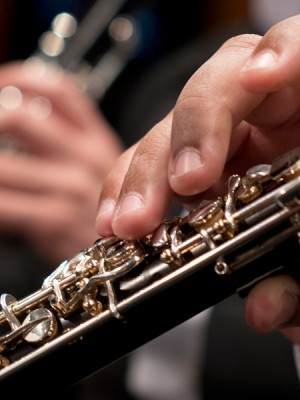 Music is a divine language capable of leading humans into transcending reality and enjoying paradise.

Born in São Paulo, Israel Silas Muniz began his music studies at the age of six with the recorder. Later, he dedicated to the oboe, guided by Benito Sacher and Eser Menezes, the latter under whom he obtained his BA from Faculdade de Música Carlos Gomes. He continued his studies in the German city of Cologne, where he received his Diplom Musiker under the professors Christian Wetzel, Washington Barella, Ikuko Homma and Michael Sieg.

In Germany, he has worked with the orchestras Bamberger Symphoniker, SWR Baden Baden und Freiburg, Staatstheater Braunschweig and Deutsche Kammerphilharmonie Bremen; in Brazil, with São Paulo State Symphony (Osesp), USP Symphony, and Orquestra Experimental de Repertório, among others. Currently, he is a member of the oboes section in the Minas Gerais Philharmonic as a solo English horn player.