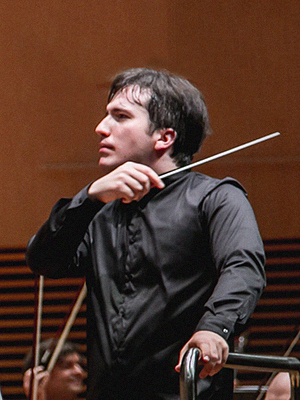 Born in São Paulo, José Soares is Associate Conductor of the Minas Gerais Philharmonic Orchestra, having been its Assistant Conductor since the two previous seasons. He won the 19th Tokyo International Music Competition for Conducting, edition 2021. José Soares also received the audience award in the same competition.

José Soares was first introduced to music by his mother, Ana Yara Campos. He studied orchestral conducting with maestro Claudio Cruz in a course of regular masterclasses held in partnership with the Orquestra Jovem do Estado de São Paulo (The São Paulo State Youth Orchestra). In 2016 and 2017 he attended as a scholar at the Festival Internacional de Inverno de Campos do Jordão (Campos do Jordão International Winter Festival), where he was tutored by Marin Alsop, Arvo Volmer, Giancarlo Guerrero and Alexander Libereich. In the last edition of the Festival, José received the Conducting Award and was invited as assistant conductor at the Orquestra Sinfônica do Estado de São Paulo – Osesp (São Paulo Symphony Orchestra) during part of the 2018 season, joining a Morning Concert invited by Marin Alsop.

Soares attended as a student at the Laboratório de Regência (Conducting Laboratory) by the Minas Gerais Philharmonic Orchestra, and was invited by maestro Fabio Mechetti to conduct one of the Concertos para a Juventude (Youth Concerts) of the 2019 season. In July of the same year he had classes with Paavo Järvi, Neëme Järvi, Kristjan Järvi and Leonid Grin, as part of the Conducting Program of the Parnü Music Festival in Estonia. He studies Composing at Universidade de São Paulo – USP (São Paulo University).