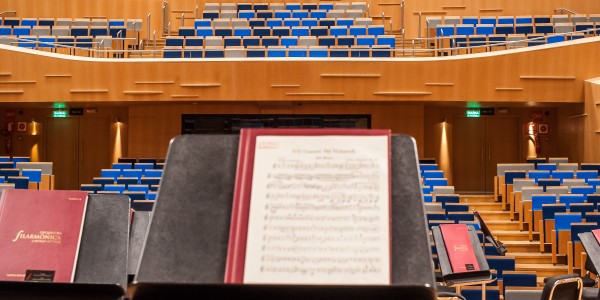 An orchestra is a living instrument, fed by the traditions of the past, for a wonderful and vast collection of enshrined works that, in his eternal relevance, justifies its existence. An orchestra is also an instrument of creative action that reveals to its audience the vitality and the inexorability of the time being.

As a notorious supporter of today’s music, the Minas Gerais Philharmonic decided to commission new works that symbolize the joy and importance of having, now, a concert hall: the Minas Gerais Hall. Thus, four notorious Brazilian composers, of contrasting aesthetics, were invited to write four pieces that will be premiered in coming concerts.

The first one is João Guilherme Ripper’s Jogos Sinfônicos [Symphonic Games]. Then we have Grande Trio Concertante by Cláudio de Freitas. Later we have Minas, by Oiliam Lanna. A peice of André Mehmari (still untitled, so fresh it is) will end this cycle.

The creativity power and the surprise element that all inedited piece bring to the stage will provoke moments of discovery, of being there for the first time. To those who look for new experiences, I extend my invitation to witness these very special concerts.