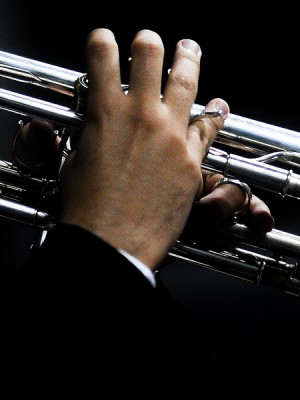 My father and my grandfather are amateur musicians and have always encouraged me. I started studying Music at eleven and by the time I was seventeen, I was granted a scholarship to study in Switzerland, where I became a professional. Then I decided to return to my home country to join the Minas Gerais Philharmonic.

Érico was born in Nova Friburgo, Rio de Janeiro, where he began to study music in the Sociedade Campesina Friburguense with Uldemberg Fernandes and Vinicius Lugon. In 1999, he was chosen as First Trumpet of Youth Brazilian Symphony Orchestra. He was granted a scholarship at the Fribourg Conservatory in Switzerland, where he graduated in Trumpet and Music Pedagogy in 2003. Érico received his Master in Interpretive Practices Trumpet degree from Haute École de Musique de Suisse Romande in 2005, as a student of Jean François Michel. Currently, in addition to integrating the Philharmonic, he is a professor at the Ouro Preto Federal University (UFOP).

He was a soloist with the Prague Chamber Orchestra, Aargauer Symphonie Orchester and others. In Switzerland, he integrated the Sinfonie Orchester Biel Solothurn and Berner Symphonieorchester during the 2001, 2002 and 2003 seasons. Érico was also a professor at the Fribourg Conservatory from 2003 to 2007 and academician at the Zurich Opera House Symphony Orchestra from 2005 to 2007. He has participated in masterclasses with Maurice André, Hakan Hardenberger, Urban Agnas, Adolph Herseth, Reinhold Friedrich and others.

Érico was first place in the Yamaha Foundation for Europe (2003), finalist for the Yamaha Trumpet Contest in Berlin (2004) and second place at the Jeunesses Musicales competition in Chaux-de-Fonds (2001).