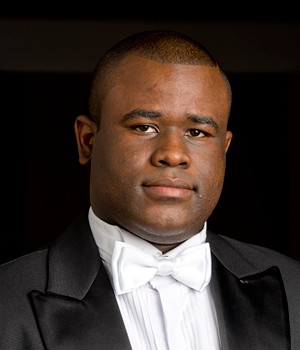 I am very grateful to God for the gift of music, which I am pleased to honor throughout my life, and I am also grateful for the support of all my family and, of course, for all my teachers.

Gideôni Loamir began his studies in violin at the age of eight in the Cidade da Música [City of Music] project, in Volta Redonda, Rio de Janeiro. During the nine years he spent there, he studied under the guidance of Maria José dos Campos, Paulo Bosísio, and Ricardo Amado. In 2010 he joined the Música nas Escolas [Music at Schools] project as a musician and as a teacher, working under the supervision of Ana de Oliveira. He was also concertmaster for the Symphony Orchestra of Barra Mansa.

From 2010 to 2012, he studied at the Brazilian Conservatory of Music. In 2015 under the guidance of David Graton, Gideôni graduated from the Osesp Academy, where he also took classes with Emmanuele Baldini. He took masterclasses with Florin Paul Simon Bernardini, Charles Stegeman, Andrés Cárdenes, Daniel Guedes, Alessandro Borgomanero, Eva Szekely, Yang Liu, Marcello Guerchfeld, and Eliane Tokeshi.

The violinist took part in music festivals such as Música de Pelotas (2014 and 2015) and Campos do Jordão International Music Festival (2013). He was concertmaster in the 2012 and 2013 editions of the Santa Catarina Music Festival Orchestra – receiving a student breakthrough prize for the 2012 edition. In 2011 he perfected his music abilities in a course of improvisation practice at the California Institute of the Arts, in Los Angeles.